A few weeks ago, the popular social media dashboard Hootsuite released a new edition with lots of shiny new features. When the updates were first announced, I was most excited about the integration with Google Analytics. However, now that I’ve had time to explore this feature I discovered that there really isn’t much to it . In the constantly evolving challenge of measuring the effectiveness of social media marketing on a company’s website/traffic/revenue, here is what I would have liked to see in this new feature:

Maybe this is just me missing something (and if so, please tell me how to fix this), but although I have multiple social media profiles/pages linked into my Hootsuite account, only my Twitter accounts are available to sync up with the site analytics. In many cases, I would suspect that Facebook is a more powerful social media presence than Twitter. At the very least Facebook has a much larger audience.

The analytics overlay shows when Tweets were sent and the traffic they drove (although this also isn’t entirely clear to me, and probably not to your basic user). However, there is no way to show what tweets were actually sent. And if you’re anything like me, you’re not going to remember what you sent out on a specific day two weeks ago. So if you are seeing a large spike in site traffic from a specific Tweet, you’ll have to dig back through Hootsuite to remember just what you were talking about. If this was set up more like the Google Analytics annotations feature it would be much more helpful. 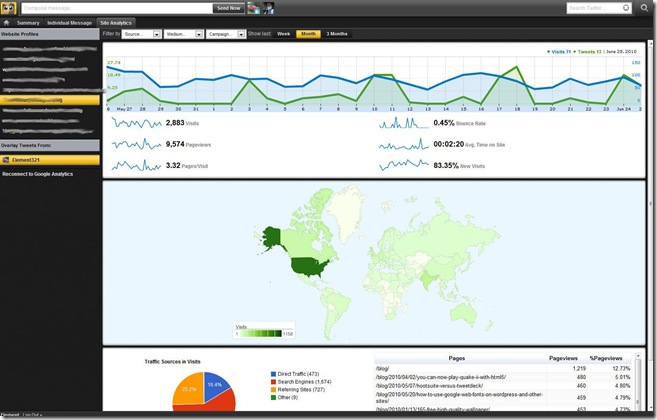 So because the Google Analytics and Hootsuite integration doesn’t actually provide much actionable data – at least not easily, the benefit that other bloggers and Hootsuite have been selling is that this feature will save you time because you don’t need to open up GA as well. What? Any analytics power-user will not use this integration as an alternative to actually digging into Google Analytics on a regular basis. All you get is a few very basic reports with no options to trend data, customize segments or drill down further into the existing reports.

I suspect that this integration works alright for two different groups – 1. heavy Twitter users with a small website. I’m thinking bloggers specifically, who are likely pretty active on Twitter and use that tool to drive a fair amount of  traffic to the site. And 2. perhaps huge brands that are also Twitter giants (Best Buy, Southwest Air, Starbucks, etc.) although their site’s probably get so much traffic that even a big Twitter day isn’t going to be the cause of an overall spike in site traffic. Most mid-sized sites with average social media usage just aren’t going to see the type of correlation that is going to make the tool useful.

Hootsuite has announced that they will be releasing a paid pro version with more advanced analytics, so hopefully some of these features are used within that version of their product. I believe Hootsuite is a great social media dashboard that can easily be used by a social media team – but I can do without the analytics integration as it currently functions.